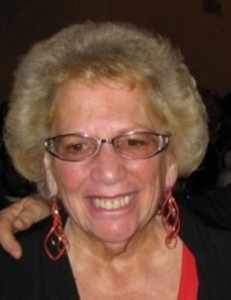 I would say that I led a normal life, raising a child, working in various educational positions once my son was in school full time. When he got his license at 16, and I was released from chauffeuring duties, I returned to school part time to pursue a degree in Speech/Language therapy.

Sid and I adored each other, and lived a basically happy life with its normal ups and downs. Our love grew and flourished for more than 3 decades. I clearly remember one day, sitting at the kitchen table, thinking to myself – For the last 10 years, we have been sailing through life. No one has died ( we had a lot of family deaths at the beginning of our marriage); no one is sick; our jobs, which had their share of ups and downs, were secure; our financial situation ( which also had its share of ups and downs) was stable and growing; our son was happy and settled in San Francisco with a woman he loved; and after the death of our 14 year old Golden Retriever, we had just adopted a 6 year old Golden, whose family could no longer care for him. I thought to myself – this is a very long time for finances and health to have been so stable. I felt a dark cloud coming in the distance. I could not ignore it, but neither did I dwell on it. But within two years, that distant dark cloud turned into a raging tornado that turned our world upside down, never to be stable, safe, or secure again.

The tornado was Alzheimer’s Disease. Sid was fired from his job that he could no longer handle; I lost my job due to a new licensing law – (I had not completed my Master’s Degree in Speech/Language Therapy, but had an excellent job working as a Speech/Language Therapy Assistant under supervision of licensed therapists. The law changed, and I was no longer going to be allowed to work without returning to school for two years and completing my Master’s Degree); and there we sat at that same kitchen table in a house we could no longer afford. Sid went on Social Security Disability, and I took an early retirement. We took these as signs that it was time to retire to Florida ( albeit about 10 years earlier than we had planned).

The rest, as they say, is history, all chronicled in my blogs. Misdiagnosis, diagnosis, torturous upheaval, financial disaster, and death.

Besides my desire to be a teacher, I always harbored a secret desire to be a writer. How ironic that the worst thing that ever happened to my husband, allowed me to pursue my dream of writing. It also allowed me to touch lives across the globe, teaching and educating people about Alzheimer’s Disease and marriage. It allowed me to find my voice and become an advocate for Alzheimer’s Disease research and funding, as I attended the Washington, DC Alzheimer’s Forum 4 times as a Florida delegate. I attended conferences, seminars, gave lectures, both Sid and I participated in panel discussions. I blossomed as a writer, speaker, advocate, and educator. Friends, relatives, and website members have told me that the one positive to come out of Sid’s disease was that both he and I helped and educated people around the world.

My take on it is that I feel despair that his disease gave me the opportunity to flourish. I would gladly give up all of these accolades to have my loving husband back, healthy in brain and body.

Since I did not get a choice as to the cards I was dealt, I did the best I could to play the hand in a positive manner. While he was still able, Sid and I talked at conferences and helped educate spouses about Alzheimer’s Disease and its unique effect on marriage. When he was no longer able, I took the baton and ran with it alone.

So here I am, alone for sure, but with Sid in my heart, continuing to educate and support Alzheimer Spouses around the world.